"...and, you know, a kid said, like he was talking about the St. Mary’s shuttle and he was just like, “Yeah, like, St. Mary’s girls...they’re kind of part of Notre Dame...it’s like the 3⁄5 Compromise.” And it just got like dead silent in the room."

I mean, everybody here is a traditional like, “Do you play a sport?” or things like that. But it’s more, the ones that bother me are more, not necessarily subconscious but I, just maybe looks or gestures that people may do in response to something that I may not think of. For example, like if I’m in LaFun with a group of friends and we’re maybe a little bit louder than we should be, I feel like you just see the eyes and just the judgment. I think that those little things, those are the things that I really pay attention to.

And then just as far as microaggressions, I mean more, some are more subtle, like, you know, “Do you play a sport?” or you know, “Where do you come from?” But I think that there are others. It’s like more, you know, there’s people trying to see...you know, I don’t know if they’re trying to play with me more, or trying to learn, I’m really not sure, really just like, you know, “Can I refer to you as, you know, a certain word?” or, “Can I call you this?” or “Can I call you that?” It’s more like, of course it’s inquisitive. It’s not an assumption that they can, but it’s more of, “Would you allow me to do this to you?” And I think those are things that, you know, make me feel like I’m isolated because, you know, it’s like, “Why would you even ask me that in the first place?” But, you know, I try...it’s tough because you don’t know whether to take offense and defend yourself in the setting, particularly group settings or if you should just exit and like walk out.

And I think that oftentimes I’ve just done the latter. Of course you feel like you’re not teaching people or you’re not making yourself heard, but it’s difficult to navigate those moments of like tension when somebody says something like...I remember there was a time in a dorm where we were having just casual conversation with a freshman and, you know, a kid said, like he was talking about the St. Mary’s shuttle and he was just like, “Yeah, like, St. Mary’s girls...they’re kind of part of Notre Dame...it’s like the 3⁄5 Compromise.” And it just got like dead silent in the room. But not like dead silent. I mean the freshman just, it was just a, “Wow...why did you say that?” But for me I just didn’t know what to do in that situation because it was just, “Wow, like, this dude really just said that.” And he, I mean, he meant to be harmful to two different groups. And you just, I mean, it just, it makes you think and I feel like it’s just more generally disrupts my flow just in a general day. I just didn’t feel like I could be comfortable in traveling to Notre Dame without anxiety.

Joe Andrews is a class of 2021 Notre Dame student. He is from Wood Dale, Illinois. Joe is a Business Analytics major and a Journalism, Ethics, and Democracy minor. On campus, he participates in Student International Business Council, class council, and in the Notre Dame Merit Scholar program as a Devine Scholar. 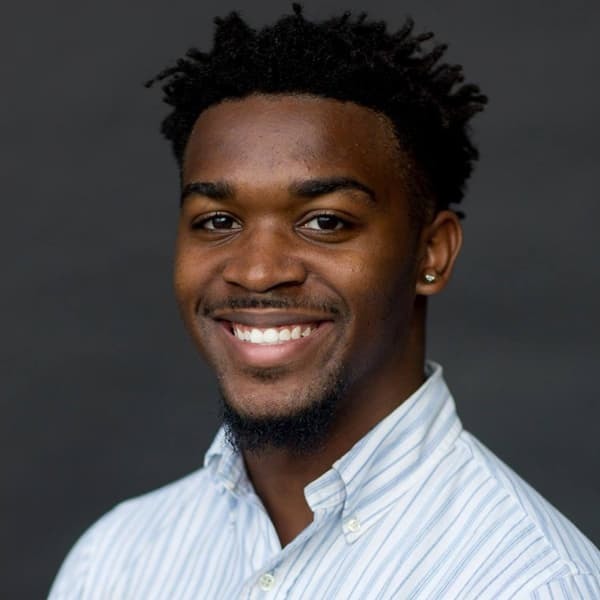 Kaleem is a Notre Dame student, class of 2020, majoring in Sociology. He is involved in Wabruba, the Gender Relations Center, and the Office of Student Affairs.